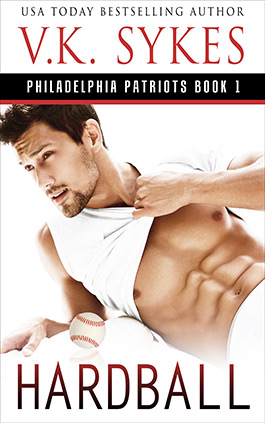 Book One in the Philadelphia Patriots Series

Will she be willing to play his game?

Dr. Holly Bell has finally achieved her dream: working as a cardiac surgeon at a prestigious children’s hospital. She’s totally dedicated to her patients, and she won’t let anything or anyone get in her way. And a hot affair with a superstar athlete is most definitely getting in Holly’s way.

Nate Carter, star pitcher for the Philadelphia Patriots, has the world in the palm of his glove. He thinks he has everything he wants–until he meets the beautiful and brainy Dr. Bell. Nate is totally up for a hot, no-strings affair, and Holly turns out to be the hottest.

But when a stalker goes after Holly, Nate has to risk everything, including his career, to protect the woman who means more to him than he ever thought possible.

Nate entered the room.  Two steps inside, he stopped short, brushing up against a woman in a white lab coat.  She must have been standing at the foot of the bed, fully hidden by the door.

The woman took a small step backward, clearly startled by the brief physical contact.  As their eyes met, Nate felt all the air sucked from his lungs in one whoosh.

He had to pull in a deep breath.  What a babe.

He couldn’t stop his gaze from quickly traveling the full length of her body, from her face to her ankles and all the way back again.  Though not nearly as tall as he was, this doctor was one seriously long drink of a woman.  Close to six feet, he reckoned.  Her unbuttoned lab coat revealed a lean but curvy figure, and long, elegant legs.  She had a naturally beautiful face, too, with big, hazel eyes, a full, sexy mouth, and a peaches and cream complexion.  Still, he suspected she tended to hide her light under a bushel.  She wore no makeup that he could see, and her auburn hair was pulled back into a ponytail.  Glasses were perched on the end of her nose, secured by a fine gold chain around her neck.  They added to her unadorned, resolutely professional look.

The doctor extended a slender hand.  Her fine eyebrows arched as she waited for him to find his voice.

Her outstretched hand finally registered in his brain and jolted him into action. “I’m sorry,” he apologized, “I was a little surprised for a moment.  You were hidden by the door.”

He took her hand and held it a few seconds.  It was long and fine-boned, but her firm grip told him it was strong, too.  The kind of hand he’d like to have doing surgery on him.  In fact, he mused, he wouldn’t mind that hand doing all sorts of things to his body.

He introduced himself.  “I’m Nate Carter.  I come around whenever I can to visit with the kids.”

She still looked puzzled.  It dawned on him that she had absolutely no idea who he was.  It didn’t bother him, though.  Actually, it felt like a nice change of pace from the constant fan recognition.

Her mouth relaxed into a half-smile. “Oh, I see,” she replied.  “You’re one of our celebrity visitors.”  Her crisp tone told him she was far from awed by his presence.  Looking down at the little girl, she said, “Mr. Carter, this is Morgan McDaniel.”

Morgan shyly put her little hand in his big one.

“Dr. Holly, I know who Nate Carter is,” she said in a whispery voice.  “He’s the Patriots’ best pitcher.  Everybody knows that.”

Dr. Bell seemed to hold back a smile as Morgan skewered her.  “I don’t think I’ve told you yet how new I am to the city, Morgan,” she said, her serious voice at odds with the amusement in her eyes.  “If I’d been here for more than just a few weeks, I’m sure I would have recognized a man as famous as Mr. Carter.”

Nate smothered a chuckle.  What a perfect response.  She validated what the little girl had said, and made him feel good at the same time.

“That’s why I didn’t recognize you, either,” he said.  “I’ve met most of the doctors here over the past few years, and I know I would have remembered if I’d ever seen you before.”  He made no attempt to keep the appreciation out of his voice.

“Well, then, I suppose we might run into each other again.”  Her smile was hesitant but intriguing.  “Since you’re a regular visitor here.”

As if he didn’t already have enough motivation to keep doing this.  “Doctor Bell,” he continued, wanting to keep the conversation going, “do you mind my asking where you’re from?  I detect a bit of a southern accent.”

She sighed, her expression conveying rueful resignation.  “You’re probably hearing the north Florida in my voice.  I grew up in Jacksonville.  But for the last nine years I’ve been studying and working at the University of Virginia.”

“You’re from Jacksonville?  No kidding?  I’ve got a condo in Ponte Vedra Beach, and I’m in Jax all the time when I’m down there.”  He looked over at Morgan, staring at the adults with big, round eyes, and winked.  The little girl giggled.

Nate glanced back at the doctor.  “That’s got to be some kind of karma, right?”

Dr. Bell registered his flirtation, and her eyes widened in surprise.  A slight blush colored her smooth cheeks.  He could feel his smile broaden as she somewhat defiantly returned his look, and it occurred to him that perhaps the good doctor was issuing a challenge.

Well, he’d be more than happy to oblige her.  He knew without a shadow of a doubt he was going to find out just what this lovely doctor was all about.

Holly’s pulse had jumped when she looked up at the imposing man who’d nearly barged into her.  In fact, she’d had to stifle a gasp at the sight of him.

She wasn’t used to seeing a man’s chin as high as her eye level.  This guy had to be six-five, or maybe even more.  And he wasn’t just tall, he was built.  Not like the proverbial Mack truck.  More like a sleek, expensive sports car.  Maybe a Ferrari, she mused, thinking back to her father’s expensive auto collection.

Despite his deep, hooded eyes and dark masculine stubble, she guessed Carter might be a couple of years younger than her.  He radiated youthful vitality and off-the-chart testosterone.  As soon as he had entered the room, she instantly sensed the power coiled in his long, whipcord body.  Instinctively, she had taken a small step backward to preserve her personal space.

It didn’t surprise her that he was an athlete.  His hard, agile-looking body fit the part.  What had surprised her was how the normally shy Morgan had immediately warmed to him, and how he interacted with her in such an easy, gentle way.

Carter was obviously a natural charmer with kids, and she would have bet a month’s salary that his charm would be just as effective on women.

Still, charming was one thing.  Steaming hot was something else entirely.  Nate Carter put the two together, and it made for a dazzling combination.  When he sat down next to Megan’s bed, Holly had opened her mouth to make her goodbyes.  But the words had died in her throat and her feet had remained glued to the floor.  She stood silently by for several minutes as the big man and the little girl happily chatted away like best friends.

“Would you like me to sign a picture for you, Morgan?” he asked, pulling an eight by ten from a folder tucked under his arm.

“Yes, please.”  Morgan’s eyes shone.  Though she was a very sick little girl, she glowed under Carter’s gentle, humorous attention.

He carefully inscribed the photo as Holly looked over his shoulder.

To beautiful Morgan—as brave and strong as she is sweet.  Your pal, Nate Carter.

“But I’d like something from you in return, honey,” he said, handing her the glossy print.

“What?” Morgan giggled, plucking shyly at the bed covers.

“Well, I’d really like it if the next time I visit I could bring my camera and get someone to take a picture of us together.  Would you like that, too?”

“Yes! Yes!” she cried, more excited than Holly had ever seen her.  “Dr. Holly can take our picture!”  She looked over at Holly, who nodded her agreement with a smile.

“Good, then, that’s settled.  I’ll come back soon.  Very soon.  Maybe I could even drop by tomorrow morning.”

Holly finally found her voice.  “We’ll be here.  You can page me when you arrive.  If I’m not tied up at the time, I’d be glad to help.”

He smiled, and the teasing warmth in his eyes set off a corresponding rush of heat in her face and neck.  God, she must be blushing like a teenager.

“Great!  I’ll see you both you lovely ladies tomorrow.”  Carter affectionately stroked Morgan’s cheek with his big hand, then winked at Holly as he left the room.

Holly gazed at his back until he was through the door and out of sight, more than a little flustered by the encounter.  The man was a powerhouse of sex appeal, yet the empathy and kindness he had shown Morgan seemed totally genuine.  It was crazy, but she couldn’t help wondering if he was single.  Though she’d seen no ring or tan line on his finger, a guy who looked and acted like that sure wasn’t likely to be sleeping alone.

Turning back to the still-beaming Morgan, Holly gave her head a quick shake.  She had exchanged maybe a dozen sentences with Nate Carter, and yet she’d caught herself wondering about his marital status.  Not that she could completely blame herself.  With those dark eyes and sensual mouth, plus the combination of strength, size, and masculinity, Nate Carter was a package that would mesmerize any red-blooded woman.

She tucked Morgan back into bed, determined to push Carter firmly from her thoughts.  No doubt he was the kind of guy who automatically flirted with every woman who crossed his path.  Yes, he had seemed interested in her, but her mind was surely playing tricks.  The guy obviously had a charm factor pretty close to ten out of ten, so it would be all too easy for a woman to see what she wanted to see.

Still, her internal radar—as rusty as it was—told her that Carter had definitely made something approaching a pass at her.  After all, there was the way his eyes had raked over her.  She didn’t think she could be wrong about that.  Then there was the sexy wink when he left the room.

Oh, for God’s sake, get a grip, Holly.  She mentally scolded herself as she strode down the hall to the elevators.  He’s a baseball player, for heaven’s sake.  Even if Nate Carter were by some remote chance actually interested in me, we’d probably run out of conversation after half an hour.

She sighed as she stabbed her finger at the elevator call button.  She knew a half hour would probably be all Carter needed to get her flat on her back and between the sheets.